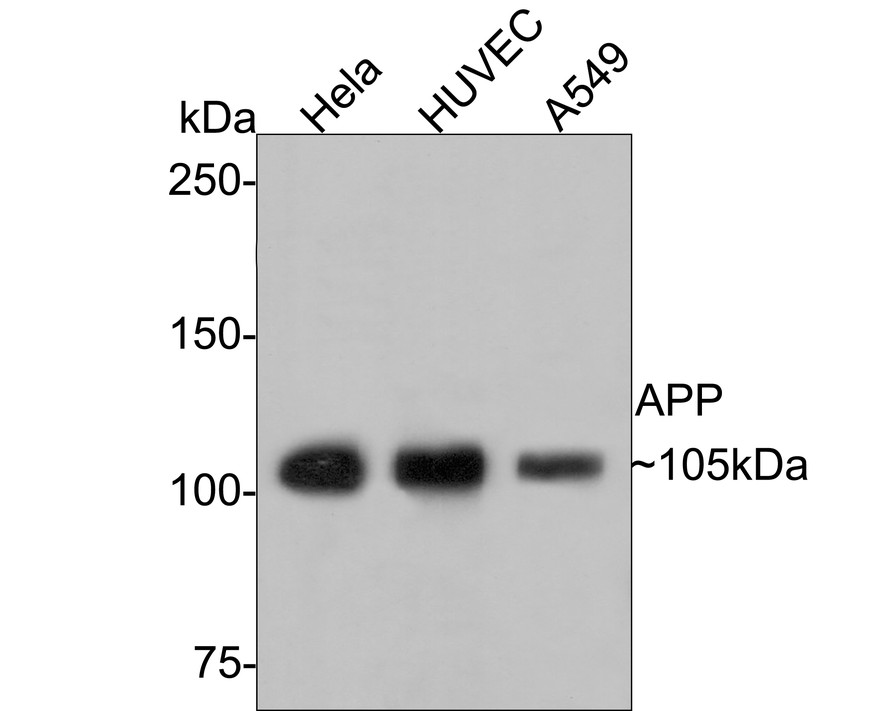 Tested for
React with
This product has been cited in peer reviewed publications, see list HERE

Belongs to the APP family.

Expressed in the brain and in cerebrospinal fluid (at protein level). Expressed in all fetal tissues examined with highest levels in brain, kidney, heart and spleen. Weak expression in liver. In adult brain, highest expression found in the frontal lobe of the cortex and in the anterior perisylvian cortex-opercular gyri. Moderate expression in the cerebellar cortex, the posterior perisylvian cortex-opercular gyri and the temporal associated cortex. Weak expression found in the striate, extra-striate and motor cortices. Expressed in cerebrospinal fluid, and plasma. Isoform APP695 is the predominant form in neuronal tissue, isoform APP751 and isoform APP770 are widely expressed in non-neuronal cells. Isoform APP751 is the most abundant form in T-lymphocytes. Appican is expressed in astrocytes.

Proteolytically processed under normal cellular conditions. Cleavage either by alpha-secretase, beta-secretase or theta-secretase leads to generation and extracellular release of soluble APP peptides, S-APP-alpha and S-APP-beta, and the retention of corresponding membrane-anchored C-terminal fragments, C80, C83 and C99. Subsequent processing of C80 and C83 by gamma-secretase yields P3 peptides. This is the major secretory pathway and is non-amyloidogenic. Alternatively, presenilin/nicastrin-mediated gamma-secretase processing of C99 releases the amyloid-beta proteins, amyloid-beta protein 40 and amyloid-beta protein 42, major components of amyloid plaques, and the cytotoxic C-terminal fragments, gamma-CTF(50), gamma-CTF(57) and gamma-CTF(59). PSEN1 cleavage is more efficient with C83 than with C99 as substrate (in vitro). Many other minor amyloid-beta peptides, amyloid-beta 1-X peptides, are found in cerebral spinal fluid (CSF) including the amyloid-beta X-15 peptides, produced from the cleavage by alpha-secretase and all terminating at Gln-686.; Proteolytically cleaved by caspases during neuronal apoptosis. Cleavage at Asp-739 by either CASP6, CASP8 or CASP9 results in the production of the neurotoxic C31 peptide and the increased production of amyloid-beta peptides.; N-glycosylated. N- and O-glycosylated. O-glycosylation on Ser and Thr residues with core 1 or possibly core 8 glycans. Partial tyrosine glycosylation (Tyr-681) is found on some minor, short amyloid-beta peptides (amyloid-beta 1-15, 1-16, 1-17, 1-18, 1-19 and 1-20) but not found on amyloid-beta protein 38, amyloid-beta protein 40 nor on amyloid-beta protein 42. Modification on a tyrosine is unusual and is more prevelant in AD patients. Glycans had Neu5AcHex(Neu5Ac)HexNAc-O-Tyr, Neu5AcNeu5AcHex(Neu5Ac)HexNAc-O-Tyr and O-AcNeu5AcNeu5AcHex(Neu5Ac)HexNAc-O-Tyr structures, where O-Ac is O-acetylation of Neu5Ac. Neu5AcNeu5Ac is most likely Neu5Ac 2,8Neu5Ac linked. O-glycosylations in the vicinity of the cleavage sites may influence the proteolytic processing. Appicans are L-APP isoforms with O-linked chondroitin sulfate.; Phosphorylation in the C-terminal on tyrosine, threonine and serine residues is neuron-specific. Phosphorylation can affect APP processing, neuronal differentiation and interaction with other proteins. Phosphorylated on Thr-743 in neuronal cells by Cdc5 kinase and Mapk10, in dividing cells by Cdc2 kinase in a cell-cycle dependent manner with maximal levels at the G2/M phase and, in vitro, by GSK-3-beta. The Thr-743 phosphorylated form causes a conformational change which reduces binding of Fe65 family members. In dopaminergic (DA) neurons, phosphorylation on Thr-743 by LRKK2 promotes the production and the nuclear translocation of the APP intracellular domain (AICD) which induces DA neuron apoptosis. Phosphorylation on Tyr-757 is required for SHC binding. Phosphorylated in the extracellular domain by casein kinases on both soluble and membrane-bound APP. This phosphorylation is inhibited by heparin.; Extracellular binding and reduction of copper, results in a corresponding oxidation of Cys-144 and Cys-158, and the formation of a disulfide bond. In vitro, the APP-Cu(+) complex in the presence of hydrogen peroxide results in an increased production of amyloid-beta-containing peptides.; Trophic-factor deprivation triggers the cleavage of surface APP by beta-secretase to release sAPP-beta which is further cleaved to release an N-terminal fragment of APP (N-APP).; Amyloid-beta peptides are degraded by IDE.; Sulfated on tyrosine residues.

Amyloid beta precursor protein (APP) is a 100-140 kDa transmembrane glycoprotein existing as several isoforms. The amino acid sequence of APP contains the amyloid domain (A-beta), which can be released by a two-step proteolytic cleavage. It is expressed in all fetal tissues examined with highest levels in brain, kidney, heart and spleen. APP acts as a cell surface receptor and performs physiological functions on the surface of neurons relevant to neurite growth, neuronal adhesion and axonogenesis. It is also involved in cell mobility and transcription regulation through protein-protein interactions.